Children Put on by Robots

Can robots induce the same social influence and peer pressure as humans do? A new study shows that children adopt a false claim when this is expressed by a group of robots. Conducted by computer scientist Anna-Lisa Vollmer of the Cluster of Excellence Cognitive Interaction Technology (CITEC) at Bielefeld University as well as her colleagues from Plymouth University (United Kingdom), the Max Planck Institute for Human Development (Berlin) and Ghent University (Belgium), this study appeared on Wednesday (15.08.2018) in the scientific journal “Science Robotics.”

How does the presence of robots influence what humans think? Photo: Tony Belpaeme / Ghent University
The research team used the “conformity experiment” – the experiment psychologist Salomon Asch became known for in the 1950s. The experiment shows just how much a group can influence the opinion of an individual. “The test subjects are tasked with evaluating a visual image, and they hear the incorrect assessment from the others in the group – who are all ‘in’ on the experiment,” explains Anna-Lisa Vollmer, who is a member of Applied Informatics, a research group led by Professor Dr. Britta Wrede that is part of the Faculty of Technology and CITEC.

In this new study, it is not people who are “in” on the experiment, but rather three Nao robots. These humanoid robots are able to speak and gesticulate, and are significantly smaller than adult humans (standing at approximately 60 centimeters). The study was divided into two parts. In the first phase of the experiment, the researchers investigated whether adults adjusted their assessment based on the one put forth by the three robots present. In the second phase, 7-9 year-old children took part in the experiment. The study participants viewed a vertical line on a screen. They had to compare the length of this line with three other lines (A, B, and C), and then say which of these lines was the same length. If the right answer was “B,” the robot would, for instance, incorrectly claim that “C” was correct.

The results: “Children give into the social pressure induced by the group of robots,” says Anna-Lisa Vollmer. “Adults, on the other hand, withstand this influence, even though they would be influenced by other humans in the same situation.”

According to Vollmer, the factors responsible for the Nao robots exerting peer pressure or not have yet to be determined. The size of the Nao robots might be the reason why they were not able to influence the adults in this experiment. “Due to their appearance and size, the Nao robots might be more likely to be perceived as being on the same level by the children.” That said, the researchers made effort to compensate for size: in both experiments, the robots’ seat level was adjusted to that of the participants.
The current study is pioneering work: “Even though children are considered to be an important user group in the future, it is not really known what influence robots have on children, and how robot behavior impacts childhood development,” says Anna-Lisa Vollmer.

The results of this study are also of practical relevance for the use of humanoid robots. “There are applications in which having influence is advantageous, such as in healthcare or education,” says Anna-Lisa Vollmer. “But of course we cannot disregard abuse or erroneous use. For example, how do we deal with a situation in which several robots in a store advertise a product and get a person to buy it even though they would not have done so otherwise? Other risks include cases in which autonomously learning robots draw incorrect conclusions from their sensory data and then go with this to people who trust the robot’s assessment,” as Vollmer explains. 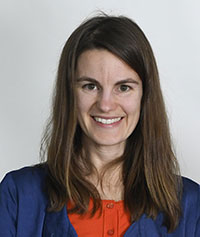 Dr. Anna-Lisa Vollmer. Photo: Bielefeld University / CITEC
In this study, Bielefeld computer scientist Vollmer worked together with roboticist Dr. Robin Read from Plymouth University, psychologist Dr. Dries Trippas of the Max Planck Institute for Human Development, and computer scientist Dr. Tony Belpaeme of Ghent University. 35-year-old Dr. Anna-Lisa Vollmer has been conducting research at the Cluster of Excellence CITEC since 2008 – first as a doctoral student, and then as a postdoctoral researcher. From 2011–2014, she was a researcher at Plymouth University.