Biological Timing: Biologists Investigate the Mechanism of an Auxiliary Clock

In December, the Nobel Prize for Medicine and Physiology will be awarded for the identification of genes that control the biological clock. The honoured academics examined fruit flies to investigate the molecular basis of biological rhythms. Biochemist Professor Dr. Dorothee Staiger of Bielefeld University has been investigating the biological clock of plants for twenty years. Her team has now published a new study in the research journal “Genome Biology”. One finding: not only the biological clock, but also a protein acting as an "auxiliary clock" ensures that recurring routines take place in the cells. 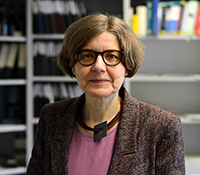 Professor Dr. Dorothee Staiger is an expert on the inner clock of plants. Photo: Bielefeld University

“The biological clock ensures that a plant times its metabolism according to the environment,” says Dorothee Staiger, “thus enabling it to directly use the first rays of sunlight for photosynthesis to produce carbohydrates, for example.”

As the Nobel Prize winners have shown, individual genes in the genome of plants, animals and humans control the biological clock. Messenger molecules - messenger RNAs - are produced by these genes at a certain time of day. These molecules start the production of clock proteins, which in turn reach their highest concentration at a fixed time of day. Clock proteins switch their own genes on and off at 24-hour intervals. They are therefore responsible for their own rhythm. The clock proteins also ensure that other genes in the cell are active at the most appropriate time of day. They initiate different processes at certain times of the day: from the opening of the flowers and the defence against pathogens in plants to the sleep-wake rhythm in humans.

Now Staiger and her team have examined another part of the biological clock in detail, using the model plant Arabidopsis thaliana (thale cress). They found an "auxiliary clock" - a protein called "AtGRP7". “Interestingly, the AtGRP7 protein behaves almost like a clock protein - it influences its own 24-hour rhythm,” says Dr. Tino Köster. "As a result, the amount of AtGRP7 protein rises during the day and falls again at night." Köster and his colleague Dr. Katja Meyer are the lead authors of the study.

According to the researchers, a daily recurring cycle that can be divided into three phases is responsible for this. “In the first phase, the protein binds to its own messenger RNA, causing its degradation at night. In the second phase, the reduction in messenger RNA causes less of the AtGRP7 protein to be formed. In the third phase, the diminished amount of protein ensures that new messenger RNA can form again. “This marks the beginning of the cycle all over again,” says Katja Meyer, who has just finished her doctorate in Staiger’s “RNA Biology and Molecular Physiology” research team. The scientific work of both Katja Meyer and Tino Köster was funded by the German Academic Scholarship Foundation for several years. 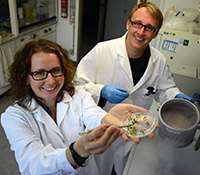 The researchers Katja Meyer und Dr. Tino Köster harvested leaves from a thale cress plant over a three-day period to determine the biological rhythms. Photo: Bielefeld University
A new finding of the study is that the protein not only binds to its own messenger RNA, but is also capable of affecting a lot of other messenger RNAs in the cell. For this, Staiger’s team and their cooperation partners at the University Halle-Wittenberg had to find all the messenger RNAs in the cells of the plants on which the protein is located. For this, the biologists subjected plants to irradiation with ultraviolet light for about two minutes. This results in the messenger RNAs binding firmly to the protein. They then isolated the protein and identified the bound RNAs by means of high-throughput sequencing. This new method is called iCLIP. It was originally developed for animal cell cultures. “For the new study, we were the world’s first research team to apply the iCLIP method to whole plants,” says Dorothee Staiger.
In a further step, the researchers examined what the protein does with the bound messenger RNAs in the cell. For this analysis, the researchers artificially increased the amount of the AtGRP7 protein in several plants and examined the effects on the messenger RNAs. “We were able to show that an increased amount of AtGRP7 can disrupt the rhythm of some messenger RNAs. This means AtGRP7 acts as an auxiliary clock, mediating between the inner clock and the messenger RNAs dependent on the time of day,” says Katja Meyer.

The study was funded by the German Research Foundation (DFG) and serves basic research. “Our aim is to understand the basic interrelationships in nature,” says Staiger. “In this case, we learn how the biological clock ensures that additional helper clocks are set in motion. And we learn which strategies plants use to adapt to changing environmental conditions.”