Bacteria, plants, insects, or even fish use antifreeze proteins to protect themselves from the cold. The proteins block the growth of ice crystals. In a new study, a German–Israeli research team has confirmed that these proteins also possess an unusual second property: at low temperatures, they can promote rather than inhibit the growth of ice crystals. The study brought together researchers from Bielefeld University, the Hebrew University of Jerusalem, and the Weizmann Institute of Science in Rehovot (Israel). It is being published today (07.03.2019) in the ‘Journal of Physical Chemistry Letters’. 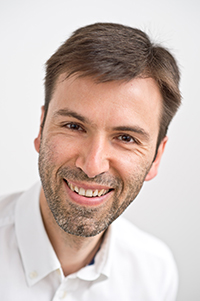 Prof. Dr Thomas Koop from Bielefeld University is studying how ice forms in microscopic spaces. Photo: Bielefeld University
‘We are studying how special, naturally occurring proteins influence the smallest of ice crystals – the crystal embryos,’ says Professor Dr Thomas Koop. The chemist heads Bielefeld University’s ‘Atmospheric and Physical Chemistry’ research group. ‘Normally, such proteins ensure that crystal embryos are neutralized and do not grow into large ice crystals.’ That, for example, is essential for the survival of the larvae of the mealworm beetle. They use a protein to protect their skin and body fluids from being damaged by ice crystals. When the outside temperature drops, the larvae secrete an antifreeze protein into their body fluids. The protein molecules cover the surface of the crystal embryos, thereby preventing them from growing large enough to damage the cells.

‘There are many other organisms in contrast, that can benefit from making water turn into ice,’ says Koop. This is the case with, for example, bacteria that trigger the formation of ice. They secrete proteins on which crystal embryos can form, or nucleate from the cold liquid water, and thereafter grow into large ice crystals. Bacteria can use this, for example, to split open the skin of a tomato.

However, the new experiments show that, ‘an antifreeze molecule cannot just inhibit the growth of ice, it can also trigger its growth,’ says Koop.

The scientists have tested two naturally occurring antifreeze proteins: the protein of the larvae of the mealworm beetle and the protein of an artic fish, the ocean pout. They observed the effect of the proteins on thin microfluidic chips, developed at the Weizmann Institute, that are permeated with microscopically small channels with droplet traps. They took pure distilled water and added a set concentration of the specific protein. Then they injected this protein solution into the chip. In the chip, minute drops of water were collected in the droplet traps. Then they placed the chips in a temperature-controlled cooling chamber that cooled them down to minus 40 degrees.

View of a research chip through a microscope: a high concentration of antifreeze proteins ensures that the drops freeze at temperatures that are less cold than usual (frozen drops are dark). Photo: Bielefeld University
‘The pure drops in our chip should actually first freeze at minus 38.4 degrees,’ says Koop. However, the opposite occurred. ‘When the drops contained the purportedly ice-inhibiting antifreeze proteins, the ice crystal embryos already began to form and grow at warmer temperatures.’ Hence, in the case of the protein of the larvae of the mealworm beetle, one-half of all the drops already started to freeze at minus 33.9 degrees. ‘This enabled us to show that whether the antifreeze proteins have ice-inhibiting or ice-promoting properties depends on temperature.  There has been speculation over the ambivalence of such proteins for many years, but we are the first to confirm this experimentally,’ says Professor Dr. Ido Braslavsky from the Hebrew University of Jerusalem. Professor Dr. Yinon Rudich from the Weizmann Institute adds, ‘It was only having the chip that enabled us to study the formation of ice through antifreeze proteins experimentally.’

Some of the experiments for the study were carried out at Bielefeld University. Complementary freezing experiments and the chips used to study the water as well as the protein solutions came from the Weizmann Institute of Science in Rehovot. The antifreeze proteins of the larvae of the mealworm beetle and the artic fish were produced at the Hebrew University of Jerusalem at the Rehovot campus. Ice inhibition of the same protein solutions was also demonstrated there.

Ice-inhibiting and ice-promoting proteins are not just common in nature. Nowadays, they are also used as technical aids. For example, antifreeze proteins in varnish can help protect the varnished surfaces from frost. The proteins can also be added to ice cream to help keep it creamy. Ice-forming proteins are used in, for example, ski resorts so that artificial snow can already be produced at a temperature of minus 3 degrees without having to wait for temperatures to drop further.