Blueprint for an artificial brain

Scientists have long been dreaming about building a computer that would work like a brain. This is because a brain is far more energy-saving than a computer, it can learn by itself, and it doesn’t need any programming. Privatdozent [senior lecturer] Dr. Andy Thomas from Bielefeld University’s Faculty of Physics is experimenting with memristors – electronic microcomponents that imitate natural nerves. Thomas and his colleagues proved that they could do this a year ago. They constructed a memristor that is capable of learning. Andy Thomas is now using his memristors as key components in a blueprint for an artificial brain. He will be presenting his results at the beginning of March in the print edition of the prestigious Journal of Physics published by the Institute of Physics in London.

A nanocomponent that is capable of learning: The Bielefeld memristor built into a chip here is 600 times thinner than a human hair.
Memristors are made of fine nanolayers and can be used to connect electric circuits. For several years now, the memristor has been considered to be the electronic equivalent of the synapse. Synapses are, so to speak, the bridges across which nerve cells (neurons) contact each other. Their connections increase in strength the more often they are used. Usually, one nerve cell is connected to other nerve cells across thousands of synapses.

Like synapses, memristors learn from earlier impulses. In their case, these are electrical impulses that (as yet) do not come from nerve cells but from the electric circuits to which they are connected. The amount of current a memristor allows to pass depends on how strong the current was that flowed through it in the past and how long it was exposed to it.

Andy Thomas explains that because of their similarity to synapses, memristors are particularly suitable for building an artificial brain – a new generation of computers. ‘They allow us to construct extremely energy-efficient and robust processors that are able to learn by themselves.’ Based on his own experiments and research findings from biology and physics, his article is the first to summarize which principles taken from nature need to be transferred to technological systems if such a neuromorphic (nerve like) computer is to function. Such principles are that memristors, just like synapses, have to ‘note’ earlier impulses, and that neurons react to an impulse only when it passes a certain threshold. 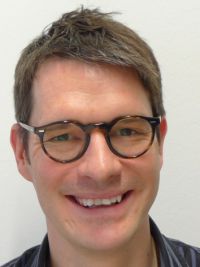 Dr. Andy Thomas has summarized the technological principles that need to be met when constructing a processor based on the brain.
Thanks to these properties, synapses can be used to reconstruct the brain process responsible for learning, says Andy Thomas. He takes the classic psychological experiment with Pavlov’s dog as an example. The experiment shows how you can link the natural reaction to a stimulus that elicits a reflex response with what is initially a neutral stimulus – this is how learning takes place. If the dog sees food, it reacts by salivating. If the dog hears a bell ring every time it sees food, this neutral stimulus will become linked to the stimulus eliciting a reflex response. As a result, the dog will also salivate when it hears only the bell ringing and no food is in sight. The reason for this is that the nerve cells in the brain that transport the stimulus eliciting a reflex response have strong synaptic links with the nerve cells that trigger the reaction.

If the neutral bell-ringing stimulus is introduced at the same time as the food stimulus, the dog will learn. The control mechanism in the brain now assumes that the nerve cells transporting the neutral stimulus (bell ringing) are also responsible for the reaction – the link between the actually ‘neutral’ nerve cell and the ‘salivation’ nerve cell also becomes stronger. This link can be trained by repeatedly bringing together the stimulus eliciting a reflex response and the neutral stimulus. ‘You can also construct such a circuit with memristors – this is a first step towards a neuromorphic processor,’ says Andy Thomas.

‘This is all possible because a memristor can store information more precisely than the bits on which previous computer processors have been based,’ says Thomas. Both a memristor and a bit work with electrical impulses. However, a bit does not allow any fine adjustment – it can only work with ‘on’ and ‘off’. In contrast, a memristor can raise or lower its resistance continuously. ‘This is how memristors deliver a basis for the gradual learning and forgetting of an artificial brain,’ explains Thomas.

For further information in the Internet, go to:
www.spinelectronics.de