Algae can draw energy from other plants

Flowers need water and light to grow. Even children learn that plants use sunlight to gather energy from earth and water. Members of Professor Dr. Olaf Kruse’s biological research team at Bielefeld University have made a groundbreaking discovery that one plant has another way of doing this. They have confirmed for the first time that a plant, the green alga Chlamydomonas reinhardtii, not only engages in photosynthesis, but also has an alternative source of energy: it can draw it from other plants. This finding could also have a major impact on the future of bioenergy. The research findings have been released on Tuesday 20 November in the online journal Nature Communications published by the renowned journal Nature. 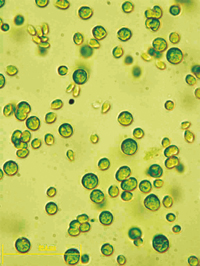 The alga Chlamydomonas reinhardtii is a single-cell organism. However, it can do something that other plants cannot do – as biologists at Bielefeld University have confirmed.
Until now, it was believed that only worms, bacteria, and fungi could digest vegetable cellulose and use it as a source of carbon for their growth and survival. Plants, in contrast, engage in the photosynthesis of carbon dioxide, water, and light. In a series of experiments, Professor Dr. Olaf Kruse and his team cultivated the microscopically small green alga species Chlamydomonas reinhardtii in a low carbon dioxide environment and observed that when faced with such a shortage, these single-cell plants can draw energy from neighbouring vegetable cellulose instead. The alga secretes enzymes (so-called cellulose enzymes) that ‘digest’ the cellulose, breaking it down into smaller sugar components. These are then transported into the cells and transformed into a source of energy: the alga can continue to grow. ‘This is the first time that such a behaviour has been confirmed in a vegetable organism’, says Professor Kruse. ‘That algae can digest cellulose contradicts every previous textbook. To a certain extent, what we are seeing is plants eating plants’. Currently, the scientists are studying whether this mechanism can also be found in other types of alga. Preliminary findings indicate that this is the case. 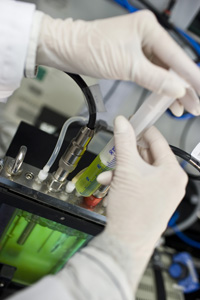 Carbon dioxide and light: It is easy to grow algae in a bioreactor like that here at Bielefeld University. They then offer an alternative to the controversial use of land plants in bioenergy production.
In the future, this ‘new’ property of algae could also be of interest for bioenergy production. Breaking down vegetable cellulose biologically is one of the most important tasks in this field. Although vast quantities of waste containing cellulose are available from, for example, field crops, it cannot be transformed into biofuels in this form. Cellulose enzymes first have to break down the material and process it. At present, the necessary cellulose enzymes are extracted from fungi that, in turn, require organic material in order to grow. If, in future, cellulose enzymes can be obtained from algae, there would be no more need for the organic material to feed the fungi. Then even when it is confirmed that algae can use alternative nutrients, water and light suffice for them to grow in normal conditions.

For further information in the Internet, go to:
www.uni-bielefeld.de/biologie/Algenbiotechnologie/kruse
www.nature.com/ncomms/journal/v3/n11/full/ncomms2210.html

Biologists at Bielefeld University have added cellulose to green alga cultures and used biochemical and molecular-biological methods to show that the algae break down the cellulose into simple sugars and can use this as a source of energy.
Contact:
Prof. Dr. Olaf Kruse, Bielefeld University
Faculty of Biology/Algae Biotechnology and Bioenergy
Telephone: +49 521 106-2257
Email: olaf.kruse@uni-bielefeld.de