« Insights into the... | Startseite | Bielefeld students... »
Published on 19. August 2016, 11:35 h
Researchers at the Cluster of Excellence CITEC investigating motor learning

For the first time in 112 years, golf is again an Olympic event. Olympic golfers hone the skills to ensure their accuracy not only with practical training, but also with mental exercises. Researchers at the Cluster of Excellence Cognitive Interaction Technology at Bielefeld University are investigating the question of how the brain of a professional golfer works in comparison to that of a novice. Not only can the researchers measure what advantages professionals have over novices: in their studies, they are also testing training concepts that can be used by golfers to optimize how they perform their movements on the green. 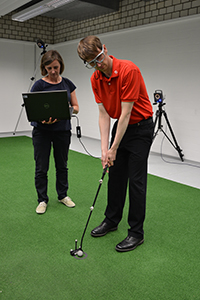 With the help of eye-tracking glasses, CITEC researcher Dr. Cornelia Frank (left) measures where the golfer directs his gaze — and thus, his attention.
Photo: CITEC/Bielefeld University
“One characteristic in particular that distinguishes professional athletes is that they use the ‘Quiet Eye’ technique – whether consciously or unconsciously,” says Professor Dr. Thomas Schack. The sports scientist and cognitive psychologist heads the “Neurocognition and Action – Biomechanics” research group at the Cluster of Excellence Cognitive Interaction Technology (CITEC). The idea behind this concept of the so-called Quiet Eye is that of the stead gaze: before an athlete makes a move, he directs his gaze at an important point. In golf, this is the ball. “The Quiet Eye stands for that moment when the brain is planning the forthcoming motor action,” says Thomas Schack.

The role played by the Quiet Eye can be seen, for instance, when a golfer putts, meaning he takes the last swing that is meant to land the ball in the hole. The golfer first executes a backswing before striking the ball with a forward stroke. As the golfer readies himself to take the backswing, his eyes are already fixed on the golf ball – and his eyes remain glued on the ball even after hitting it. “Our research confirms that professionals focus on the ball longer than novices. When taking a putt, this occurs for up to three seconds,” says Thomas Schack, who adds that the more difficult the task, the longer the golfer maintains his visual focus on the ball.

In their learning studies, Schack’s research group tests how golf novices can best memorize the sequences of motion in the game of golf and the impressions associated with them. Is this better accomplished by physical practice – actually performing the movements – or by mental practice, that is, by imagining the sequences of motion in one’s head? In one study conducted by the sports scientist Dr. Cornelia Frank, 45 people practiced their golf putts over three days: one group only did physical pracitce, and the second group did both physical and mental practice (combined practice). During the mental practice, the study participants were instructed to mentally rehearse a putt. The study participants were told to vividly imagine what they see, feel, and hear from their own perspective before, during, and after striking the ball. This mental training exercise was repeated ten times on each of the three days.

A pair of eye-tracking glasses recorded both before and after the training whether – or how long – the study participants fixated with their eyes on the ball. In addition to the golfer’s gaze, Cornelia Frank also recorded the study subjects’ putts and evaluated how proper the pattern of movement was stored in their memory. At the end, she compared both groups: how did the golfers’ gaze (the Quiet Eye), participants’ knowledge of movement representations, and the execution of golf movements change?

A key finding was that “the combined training contributed to a longer duration of visual fixation on the ball. The gaze thus remained focused longer on the ball both before and after the decisive swing – similar to professional golfers,” explains Frank. At the same time, the mental practice also ensured that the participants‘ movements were stored more accurately in memory. “Their movement representations in memory shifted more significantly towards that of a professional golfer’s,” explains the sports scientist. “We could show that the duration of Quiet Eye is directly linked to the motion imagery stored in their memory.” The study also showed that the purely physical practice had less of an impact on the duration of the visual fixation.

A new study is aimed at establishing the relationship between memory activity and the Quiet Eye. For his master’s thesis, golfer Daniel Boxberger is pursuing the assumption: “Particularly at the moment when the Quiet Eye takes place, there is a lot of information being processed in order to adapt the upcoming movement to the situation.” In his learning study, which has been running since late June 2016, Boxberger is measuring how the pupils dilate both before and after practice. Based on these results, the researchers can make inferences about the mental demands of the activity because “the more dilated the pupil is at the moment of the Quiet Eye, the greater the mental load,” explains Frank, who is supervising Boxberger’s thesis.

With the findings from their studies, CITEC researchers can, in the future, more reliably determine how well golfers have learned a new motion sequence. To do this, they are also using virtual reality technology, and want to investigate the role of the Quiet Eye in the virtual coaching space “ICSpace.” Among the developments created by the “Neurocognition and Action – Biomechanics” research group is a software that determines how well golfers and other athletes have mastered relevant techniques by measuring movement representations in memory. The research group has been working together with golf coaches and golfers from various performance classes for approximately ten years.

The gaze of a professional golfer rests on the ball for up to three seconds before he takes a swing. The screen shows where exactly the golfer’s gaze falls. Photo: CITEC/Bielefeld University
Posted by EBernard in General
Kommentare: