Researchers from the Cluster of Excellence Cognitive Interaction Technology of Bielefeld University are working on a project to develop a socially competent apartment able to support residents in their everyday lives. This project is one of a kind in Germany. Twelve research groups from the research institute are collaborating on this new large project. CITEC has invested around 1.8 million Euros into the project that will run until 2017. An important component of the intelligent apartment has just arrived: a service robot built by Meka Robotics, a company from San Francisco, USA. This week, it moved into the laboratory apartment in the CITEC building at Campus North.

Prof. Dr.-Ing. Britta Wrede and Prof. Dr. Helge Ritter welcome the robot from the Maka Robotics company. The new service robot is going to be equipped with a variant of the Flobi head (background). Photo: Bielefeld University

In the future, the intelligent apartment and robots working there are expected to support guests in everyday tasks and make their lives more comfortable. ‘The aim of the project is to develop an intelligent apartment which understands natural situations and autonomously offers services according to needs,’ says Professor Dr.–Ing Britta Wrede who runs the CITEC project with PD Dr.-Ing. Sven Wachsmuth and Dr. Thomas Hermann. According to Wrede, the project is unique in Germany as it is not limited to individual services such as household cleaning or support with telephone calls, for example. Rather, it aims to learn how to react in a flexible manner to the needs of its guests and offer solutions that suit the particular situation.

The service robot to be deployed in the apartment has the model name ‘Meka Mobile Manipulator M1’. It will be connected to the apartment’s sensors and control system so that the apartment can immediately direct it to where support is needed. Its torso is mounted onto a moveable base.  Its hands are based on human hands, so that it can be taught to grip ‘naturally’. The robot should be able to spring into action to put shopping away in the fridge, for example, or to serve drinks to guests. At present the robot is wearing the sensor head it was delivered with. As part of the project, the robot will be equipped with a variant of the Flobi robot head, developed at CITEC. Flobi is a social robot with emotional facial expressions that can react to its counterpart. Research carried out at CITEC has shown that Flobi has greater acceptance by people as a conversational partner than systems with a more technical appearance.

The apartment learns when social action is necessary

‘What is unique about our Intelligent Apartment is that it is trained on the basis of real and spontaneous everyday situations,’ says Britta Wrede. ‘Student learning groups meet in the apartment, our teams also go there for breaks and for meetings and we bring visitors there,’ adds the informatics specialist. ‘The system should perceive autonomously if social action is required in these situations.’ In practice this can mean that the robot sets up the required number of chairs for meetings and offers some refreshments during breaks. The apartment can also react to a beamer presentation by dimming the lights. If the system realises that a visitor would like a presentation of the apartment, then the robot will welcome the visitor and give a tour of the rooms. 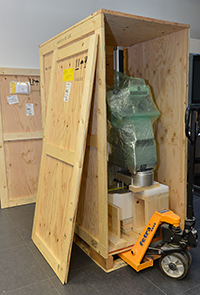 The robot is delivered from the USA in a large wooden crate. Photo: Bielefeld University

It is expected that guests will be able to communicate with the apartment by using touch screens and verbal interaction. To enable the apartment to perceive what is happening in the rooms, technicians will be equipping it with cameras, microphones and depth sensors. Touch sensitive sensors in the floor are expected to register when people or objects come into contact with the floor. This is useful, for example, if someone becomes unconscious and falls. In this case, the apartment would contact the emergency services. ‘Our research at the Cluster of Excellence aims to enable senior citizens to live independently for as long as possible,’ says Professor Dr. Helge Ritter, Coordinator of the Cluster of Excellence CITEC. ‘An intelligent apartment which can react in an emergency situation and help senior citizens with tasks that are difficult for them could be the key to independent living in old age.’ Just a few months ago, CITEC unveiled Billie, an avatar on a screen that can help to plan appointments. There are plans to integrate other helpers like this virtual assistant into the apartment’s system. The company Miele & Cie. KG has equipped the apartment with household appliances that can be controlled and programmed using a Smartphone. Miele is a strategic partner of the Cluster of Excellence CITEC.  Researchers from CITEC work in collaboration with Miele to integrate the appliances into the apartment’s control system.

The Intelligent Apartment is part of the new CITEC research building which was completed in June 2013. The Laboratory Apartment measures 60 square metres and has three rooms including a kitchen, a living room, a gym and a bathroom.