Why do male animals need millions of sperms every day in order to reproduce? And why are there two sexes anyway? These and related questions are the topic of the latest issue of the research journal Molecular Human Reproduction published today (16 October 2014). The evolutionary biologist Steven Ramm from Bielefeld University Bielefeld has compiled this special issue on sperm competition. 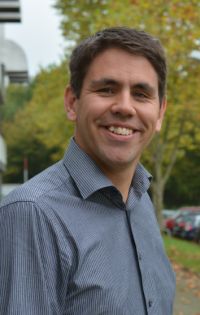 Dr. Steven Ramm from Bielefeld University has compiled a special issue on sperm competition. Photo: Bielefeld University
In nature, it is not unusual for a female to copulate with several males in quick succession – chimpanzees are one good example. ‘The sperm of the different males then compete within the female to fertilize the eggs,’ says Ramm. ‘Generally speaking, the best sperm wins. This may involve its speed or also be due to the amount of sperm transferred. It can also be useful for the seminal fluid to be viscous, meaning it sticks inside the female reproductive tract to try to keep other sperm at bay.’

When the sperm of one male compete with those of another, the sperm cells they produce need to be well adapted to this ‘fight over the egg’. ‘Producing the optimum sperm type occurs in the testis, during spermatogenesis,’ explains Ramm. This is the topic of his own article, written together with three colleagues from the Universities of Basel (Switzerland) and Münster. Sperm are considered to be the most diverse type of cell in the entire animal kingdom. The researchers describe how different sperm cells are formed in for example flies, roundworms, and vertebrates. They also show that it is not just the amount of sperm that is important, but also its form. ‘Even just the size of the individual sperm cell may provide a competitive advantage,’ says Ramm. Alongside human sperm that are tiny and swim with their tails, there are, for example, spherical and crawling sperm or even giant sperm that are larger than the male that produces them.

Evolutionary biologists study how living creatures have developed over millions of years. They focus on asking how they are adapted to their environment. ‘The main concern in our special issue is to try to understand why reproduction in animals happens in the way that it does,’ says Ramm. ‘In the long term, this knowledge could, for example, help reproductive biologists to modify sperm genetically to increase the chance of fertilization. One possible application of such methods could be to help conserve endangered species.’

Dr. Steven Ramm has been engaged in research at Bielefeld University’s Faculty of Biology since 2012. One of his research topics in the Department of Evolutionary Biology is to identify what characteristics of male animals enable them to successfully reproduce. In 2006, Ramm graduated with his doctorate from the University of Liverpool (England) where he carried on doing research until 2009. This was followed by research at the University of Innsbruck (Austria) and the University of Basel (Switzerland). Ramm is leading the project ‘Functional and evolutionary genetics of seminal fluid’, funded by the German Research Foundation (DFG). He is also responsible for the EU research project ‘SpermEvolution’.

Sperm come in all shapes and sizes: the sperm cell of the flatworm “Macrostomum lignano” (picture) has a frontal “feeler” (right) and two lateral bristles that may function to anchor the sperm inside the female sperm-receiving organ. Photo: Bielefeld University
Original publication:
Steven A. Ramm, Sperm competition and the evolution of reproductive systems (Editorial). Molecular Human Reproduction, http://dx.doi.org/10.1093/molehr/gau076, published on 16 October 2014


Posted by NLangohr in General
Kommentare: