Up to now, if scientists wanted to study blood cells, algae, or bacteria under the microscope, they had to mount these cells on a substrate such as a glass slide. Physicists at Bielefeld and Frankfurt Universities have developed a method that traps biological cells with a laser beam enabling them to study them at very high resolutions. In science fiction books and films, the principle is known as the ‘tractor beam’. Using this procedure, the physicists have obtained superresolution images of the DNA in single bacteria. The physicist Robin Diekmann and his colleagues are publishing this new development this Tuesday (13.12.2016) in the latest issue of the research journal ‘Nature Communications’. 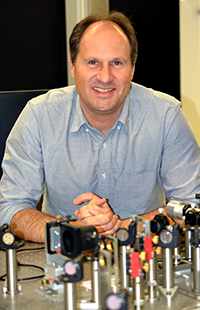 Prof. Dr. Thomas Huser and his team have further developed a procedure for the superresolution microscopy of cells. This enables them to hold the cells without using substrates and obtain optical images with a similar resolution to that obtained with electron microscopes. Photo: Bielefeld University
One of the problems facing researchers who want to examine biological cells microscopically is that any preparatory treatment will change the cells. Many bacteria prefer to be able to swim freely in solution. Blood cells are similar: They are continuously in rapid flow, and do not remain on surfaces. Indeed, if they adhere to a surface, this changes their structure and they die.

‘Our new method enables us to take cells that cannot be anchored on surfaces and then use an optical trap to study them at a very high resolution. The cells are held in place by a kind of optical tractor beam. The principle underlying this laser beam is similar to the concept to be found in the television series “Star Trek”,’ says Professor Dr. Thomas Huser. He is the head of the Biomolecular Photonics Research Group in the Faculty of Physics. ‘What’s special is that the samples are not only immobilized without a substrate but can also be turned and rotated. The laser beam functions as an extended hand for making microscopically small adjustments.’

The Bielefeld physicists have further developed the procedure for use in superresolution fluorescence microscopy. This is considered to be a key technology in biology and biomedicine because it delivers the first way to study biological processes in living cells at a high scale – something that was previously only possible with electron microscopy. To obtain images with such microscopes, researchers add fluorescent probes to the cells they wish to study, and these will then light up when a laser beam is directed towards them. A sensor can then be used to record this fluorescent radiation so that researchers can even gain three-dimensional images of the cells.

In their new method, the Bielefeld researchers use a second laser beam as an optical trap so that the cells float under the microscope and can be moved at will. ‘The laser beam is very intensive but invisible to the naked eye because it uses infrared light,’ says Robin Diekmann, a member of the Biomolecular Photonics Research Group. ‘When this laser beam is directed towards a cell, forces develop within the cell that hold it within the focus of the beam,’ says Diekmann. Using their new method, the Bielefeld physicists have succeeded in holding and rotating bacterial cells in such a way that they can obtain images of the cells from several sides. Thanks to the rotation, the researchers can study the three-dimensional structure of the DNA at a resolution of circa 0.0001 millimetres.

Professor Huser and his team want to further modify the method so that it will enable them to observe the interplay between living cells. They would then be able to study, for example, how germs penetrate cells.

To develop the new methods, the Bielefeld scientists are working together with Prof. Dr. Mike Heilemann and Christoph Spahn from the Johann Wolfgang Goethe University of Frankfurt am Main.

Posted by NLangohr in General
Kommentare: