Bielefeld University has been awarded its second Alexander von Humboldt Professorship. This time, it goes to the computer scientist Professor Dr Yaochu Jin. He is one of the world’s leading experts on evolutionary algorithms—a form of artificial intelligence (AI) that optimizes its own capabilities. In autumn 2021, Jin will move from the University of Surrey (UK) to Bielefeld University. The Humboldt Professorship enables researchers who have previously been working abroad to take up a professorship at a German university where they can conduct pioneering research. It is the most highly endowed international research award in the country. Yaochu Jin will receive 3.5 million euros in prize money over a period of five years. It was announced today (01.07.2021) that a total of six new Humboldt Professorships have been selected. Jin is one of three award winners who will be honoured with the award for their research on AI. 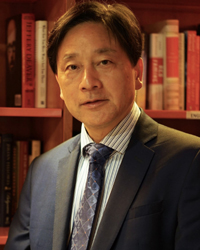 Professor Dr Yaochu Jin will start conducting research as a Humboldt Professor at Bielefeld University in October 2021. As part of the research award, he will receive 3.5 million euros. Photo: Pei An
‘We are delighted that the Alexander von Humboldt Foundation is honouring the university’s previous research achievements on human-centred artificial intelligence with this award and ensuring that Yaochu Jin will enrich our research in this field with his expertise,’ says Professor Dr Gerhard Sagerer, rector of Bielefeld University. Yaochu Jin will take up his professorship in the Faculty of Technology. ‘He will play a prominent role in developing new research networks and, in particular, in networking the Faculty of Technology and the Medicine School OWL. This can include, for example, developing self-learning systems for medical analyses and thus creating innovations for personalized medicine,’ Gerhard Sagerer explains.

Evolutionary algorithms as the key to future technologies
Yaochu Jin’s research can be used not only for medical services, but also for numerous other applications such as solving industrially significant problems. These may range from interaction between robots to the design of vehicles.

All these applications are based on evolutionary algorithms that use principles of natural evolution to solve technical problems. One use of Jin’s research results is to apply such principles to multi-objective optimization—for example, to achieve not only accurate but also robust and energy-efficient solutions in the field of swarm robotics and engineering design.

Connected to Bielefeld University for more than a decade
At Bielefeld University’s Faculty of Technology, Yaochu Jin will establish a new working group ‘Nature-Inspired Computing and Engineering’. He and his team will also be setting up a research laboratory equipped with hardware for morphogenetic robotics. In this form of robotics, shaped decisively by Jin, who is viewed as one of the pioneers in the field of swarm robotics, robots evolve in self-organized ways. The morphogenetic self-organization mechanism, inspired from biological morphogenesis, enables robots to self-organize as a group in order to solve a problem that a single robot would not be able to cope with alone.

‘I am looking forward to continuing my work at Bielefeld University in the future and helping to further develop the Bielefeld approach to cognitive interaction technology,’ says Yaochu Jin. He has been associated with the East Westphalian university for a long time. In recent years, he has consulted several Bielefeld doctoral students with their projects. Before that, from 2007 to 2010, he was a lead investigator at the graduate school of the university’s Research Institute for Cognition and Robotics (CoR-Lab) that was run as a partnership between Bielefeld University and the Honda Research Institute Europe (Offenbach). ‘During that time, I experienced how open scientists in Bielefeld are, to cooperative and interdisciplinary research. In addition, there is a continuous collaboration with external companies and research institutions. These provide a perfect environment for creating technical solutions that actually work in practice.’

Innovations in problem solving for complex scenarios
‘One aspect that played a special role when nominating Yaochu Jin for the Humboldt Professorship is that he complements the research profile of the Faculty of Technology, particularly through his focus on the multi-objective optimization of AI systems,’ explains Professor Dr Barbara Hammer, chair of the Machine Learning research group. Hammer was instrumental in preparing Yaochu Jin’s nomination. ‘Expertise in multi-objective optimization is essential for efficient problem solving in complex scenarios. It is thus not only highly relevant in various fields such as modular robotics, medicine, and bioinformatics, but also in economics and machine learning,’ says Hammer, who has collaborated with Jin several times in the past. For example, both are active members of the IEEE Computational Intelligence Society, an international professional association. ‘I am especially looking forward to doing research with Yaochu Jin on innovations in federated learning and online machine learning.’

Professor Dr.-Ing. Yaochu Jin, born in China, began his academic career at Zhejiang University in China, where he worked as an associate professor following his doctorate in 1996. After research stays at the Ruhr University Bochum and the State University of New Jersey, USA, he conducted research at Honda R&D Europe and Honda Research Institute Europe, both in Offenbach, Germany, from 1999 to 2010. In 2010, he moved to the University of Surrey, United Kingdom, as a professor, and became one of 14 Distinguished Chair Professors at Surrey in 2019. He was also Finland Distinguished Professor at the University of Jyväskylä, Finland for three years. Jin’s research has been recognized with numerous awards. For example, he has received five Outstanding Paper Awards from the IEEE Computational Intelligence Society and has been appointed an IEEE Distinguished Lecturer several times. In November 2015, he was elevated to an IEEE Fellow for contributions to evolutionary optimization.

Research award helps to attract top international researchers
The Alexander von Humboldt Professorship has been offered since 2008. It is the most highly endowed research award in Germany—it grants 5 million euros for academics doing experimental and 3.5 million euros for those doing theoretical research. The award is granted by the Alexander von Humboldt Foundation and funded by the Federal Ministry of Education and Research. With the Humboldt Professorship, the Foundation wants to enable German universities to raise their own profile in the global competition. It gives universities the opportunity to offer top researchers internationally competitive conditions. At the same time, the award includes an obligation to offer the new Humboldt Professors a long-term perspective for their research in Germany.

The first Humboldt Professorship at Bielefeld University was awarded to the mathematician Professor Dr William Crawley-Boevey in 2016. He is considered a luminary in his field—the representation theory of algebras. He moved to Bielefeld from the University of Leeds (UK).

Posted by JHeeren in General
Kommentare: