The 2016 Alexander von Humboldt Professorship – the most highly endowed research award in Germany – was awarded yesterday (03.05.2016) in Berlin, and Bielefeld University was present. The mathematician Professor Dr. William Crawley-Boevey, one of a total of six award winners, will start carrying out research at Bielefeld University in October. He will be moving to Bielefeld from the University of Leeds in Great Britain. The Humboldt Professorship is endowed with 3.5 million Euros over five years for theoretical scientists such as Crawley-Boevey.

At the award ceremony for the Alexander von Humboldt Professorship in Berlin. From left to right: Professor Dr. Gerhard Sagerer, Rektor of Bielefeld University; Cornelia Quennet-Thielen, State Secretary in the Federal Ministry of Education and Research; Professor Dr. William Crawley-Boevey, the award winner; and Helmut Schwarz, President of the Humboldt Foundation. Photo: Humboldt Foundation /David Ausserhofer
‘We are pleased to welcome an excellent mathematician who will enrich the discipline with his expertise,’ says Rektor Professor Dr.-Ing. Gerhard Sagerer. Crawley-Boevey was nominated by Bielefeld University.

Crawley-Boevey will be working in a team together with Professor Dr. Henning Krause in the field of representation theory. Krause sees the award as an investment in the Faculty of Mathematics that will enable it to continue to be an international leader in the future. The aim of the Humboldt Professorship is to build up teams and structures at German universities that can compete with the best in the world. During his time in Bielefeld as a postdoc (1988 to 1990), he already forged contacts with the university and he has continued to maintain close ties since then. The mathematician will be bringing one doctoral student with him from Leeds for the research work. Further postdocs for his team are already working at the chair in Bielefeld.

Over the next five years, the academic will be concentrating exclusively on research. Although the Humboldt Professorship frees him from all teaching duties for the next five years, Henning Krause says that Crawley-Boevey wants to offer seminars for interested mathematics students to attract young academics to his field of research.

William Crawley-Boevey’s research field is the representation theory of algebras. This has a special place in Bielefeld: it was established here in the 1970s. ‘Appointing William Crawley-Boevey further strengthens and extends this tradition,’ says Krause. He describes his colleague’s research work as ‘world class; it will be a wonderful addition to mathematics at Bielefeld.’ 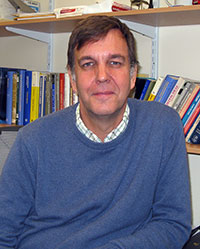 William Crawley-Boevey, expert on the representation theory of algebras, will be moving from Leeds to Bielefeld University in October. Photo: Robert J. Marsh
William Crawley-Boevey, born in London in 1960, is currently teaching pure mathematics at the University of Leeds. He studied at the University of Cambridge where he gained his doctorate in 1985. This was followed by postdoc work in Liverpool, Bielefeld, Oxford, and Leeds. He is a Fellow of the American Mathematical Society.

The Alexander von Humboldt Professorship was set up in 2008. At 3.5 million Euros, it is the most highly endowed research award in Germany. It is given by the Alexander von Humboldt Foundation and financed by the Federal Ministry of Education and Research. The idea behind the Humboldt Professorship is to enable German universities to enhance their own internationally competitive profiles. It gives universities the chance to offer competitive conditions that will attract top international academics. The award is accompanied by the obligation to grant new Humboldt professors a long-term perspective for carrying out their research in Germany.

Posted by NFrei in General
Kommentare: