Medication that specifically targets cancer cells and delivers its active agent without harming healthy cells – this is what doctoral students of the Magicbullet network will be working on from mid-2015. Bielefeld University is coordinating the programme for the development of “gentle” cancer treatment. The European Union is supporting it with around €4 million in funding. 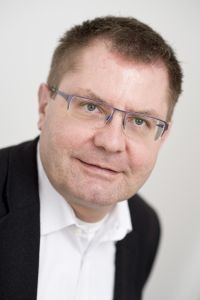 Professor Dr. Norbert Sewald is conducting research on anti-tumour drugs designed to work without side effects. He is coordinating the new international network of doctoral students. Photo: Bielefeld University
Fifteen doctoral students with backgrounds in chemistry, biology and biomedicine will con-duct research in the network until 2018. Six universities, a research institute and two compa-nies in Germany, Italy, Finland and Hungary will train the doctoral students in a joint network and will be additionally supported by three companies and two research institutes.

Current cancer therapies are usually accompanied by severe side effects. “The reason for this is that active agents are used which are designed to poison and kill the cancer cells. These active agents also damage healthy cells,” says Professor Dr. Norbert Sewald. He is the coordi-nator of the new programme, a European Training Network for young researchers in the frame of the Marie Skłodowska-Curie actions.

The development of the targeted, gentle cancer medication involves the researchers of Magicbullet attaching the toxic active agent (payload) to a peptide (a small protein molecule - delivery vector). These delivery vectors recognise molecules that are typical for tumour cells, bind to them and deliver the payload. “The delivery vectors are a kind of address label con-taining information as to where the anti-tumour payloads are to be delivered,” says Sewald. According to the scientist, such new treatments could fulfil the earlier vision of Nobel laureate Paul Ehrlich (1854-1915), who coined the term “magic bullets” for such tumour-targeting con-jugates.

The researchers want to “package” the anti-tumour agent cryptophycin in such a way that it only targets cancer cells. The image shows how cryptophycin binds to a protein molecule, as also occurs in cancer cells, thus preventing their growth. Image: Bielefeld University
“Drugs based on this principle are already on the market,” explains Sewald. “These contain antibodies, though, that is to say large protein molecules produced by means of biotechnol-ogy, which have to be purified elaborately and are, therefore, very expensive. But we want to develop small protein molecules, peptides, as the transporters of the active agent. The ad-vantage is that the chemical processes to produce them are simpler and quicker than those for antibodies.” For instance, during the production process it is easier to remove impurities. “Peptides can take a higher load of active agent and easily penetrate tissue. That’s what makes them so special,” says Sewald. Peptides are roughly one hundred times smaller than antibodies. For Sewald it is also important that they can be produced in a highly purified form. The new programme is all about fundamental research. “Our drugs will be prototypes. But we will be creating the scientific basis for anti-tumour medicines which could come on the market in perhaps ten or twenty years’ time,” explains Sewald.

Two of the doctoral students from the Magicbullet network will be conducting research in Professor Sewald’s team while the other researchers will be divided among the project part-ners: University of Cologne, University of Milan (Italy), University of Insubria (Como, Italy), Uni-versity of Helsinki, (Finland), Eötvös Loránd University in Budapest (Hungary), National Institute for Cancer Research, Budapest (Hungary) and the two pharmaceutical companies Heidelberg Pharma in Ladenburg and Exiris in Rome (Italy).

The doctoral students will meet regularly to exchange information on their research projects. An international conference will take place from 21-23 September in Bielefeld University’s Center for Interdisciplinary Research (ZiF) as part of the CeBiTec Research Conference series. During the three-year programme, the doctoral students will also receive interdisciplinary training in order to familiarise themselves with the results and working methods of their col-leagues. In addition, all the young researchers taking part will spend up to nine months con-ducting research at one of the partner organisations. This could also be at one of the organi-sations associated with Magicbullet – Bayer Pharma AG in Wuppertal, the Optical Imaging Center in Erlangen, the Fraunhofer Institute for Toxicology and Experimental Medicine in Hanover, IRBM pharmaceutical company in Rome (Italy) and Kineto in Budapest (Hungary).

Magicbullet is supported under Horizon 2020, the EU Framework Programme for Research and Innovation.

Posted by RWiedenhaus in General
Kommentare: