Floka the robot is designed to assist people, as needed, to safely cope with the stress of everyday situations in their own home. As part of a large-scale research project at the Cluster of Excellence Cognitive Interaction Technology (CITEC) at Bielefeld University, the researchers are equipping Floka with the necessary capabilities to do this. The Bielefeld robot will now compete in its first RoboCup world championship. From 30 June – 4 July, Floka and his already established robotic colleague Tobi will compete in the ten events of the household service league “RoboCup@Home” in order to make it into the finale. The robots will be competing against 23 opponents. 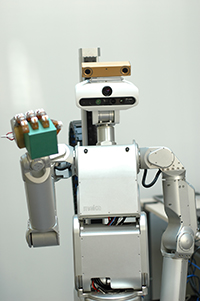 Floka has a sensor head whose camera-eyes can perceive color and depth, which allows the robot to see obstacles. Photo: CITEC/Bielefeld University.
The robots will be accompanied to the competition by a team of four CITEC researchers: Privatdozent Dr. Sven Wachsmuth, Sebastian Meyer zu Borgsen, Florian Lier, and Timo Korthals, as well as nine students from Bielefeld University’s Faculty of Technology. In the context of a university seminar, the students prepared Floka to participate in the competition by writing new programs for the robot’s software.

Floka belongs to the large-scale CITEC project “The Cognitive Service Robotics Apartment as Ambient Host,” (CSRA), in which researchers are working to develop a socially competent apartment that autonomously assists its residents in their daily lives. Together with the robot Floka, the apartment is designed to learn to react flexibly to the needs of its guests, and to offer appropriate solutions for the situation at hand.

The robot is based on the model “Meka Mobile Manipulator M1” from the company Meka Robotics in San Francisco, California. Its head is interchangeable, and at RoboCup, Floka will be fitted with a sensor head whose camera eyes can perceive color and depth, allowing it to see obstacles such as people or objects. Floka was introduced to the public for the first time from 21–24 June 2016 at Automatica, an automation trade fair in Munich, where it was equipped with the “social” robotic head also developed at CITEC that can express emotional facial expressions.

The events in the RoboCup@Home household service league have names like “Restaurant,” Person Recognition,” “Following and Guiding,” and “Navigation.” In many cases, the events are about getting robots “in shape” so that they can provide assistance to senior citizens and young people.

In the “Restaurant” event, the robot is sent into an unfamiliar environment, where it has to wait on guests and bring them the drinks they order. Here, the robot must react to unexpected disturbances, such as a person suddenly walking through its path. The Bielefeld team is also using several mini robots named Amiro in similar tasks. These robots assist Floka as mobile sensors, showing Floka where new guests have sat down, or which table needs to be cleared off. For the “Navigation” task, the robot has to enter into a new apartment, where it then goes through several stations before leaving the apartment again. Here, the robot has to react to barriers and navigate around a series of obstacles.

The RoboCup world championship is being held in Germany for the second time, the first being Bremen in 2006. The inaugural RoboCup completion was held in Japan in 1997.

Since 2009, the Bielefeld team has competed in the annual robotics world championship. To date, they have made it into the top 8 teams every year, and even came in third place in 2012 (Mexico City) and 2015 (Hefei, China). Unlike previous years, however, this year the team is competing not only with the robot Flobi, but also with the newer robot Floka. “With its two arms, Floka is much similar to us humans in its design. This makes the robot better at, for instance, grasping things on a shelf,” says team leader Sven Wachsmuth.

This year, three young roboticists are along to support the Bielefeld Team: Manuel Rieger, Joseph Beerel, and Karl Christian Lautenschläger. The high school students from Thuringia are winners of the competition “Jugend forscht” (Young people conducting research). They developed a training robot to serve as a sparring partner for combat sports and self-defense. CITEC is one of the partner organizations of the “Jugend forscht” competition. Traveling with the Bielefeld team to RoboCup is part of the award won by the young researchers won. The prize is sponsored by the Heinz Nixdorf MuseumsForum in Paderborn.

The goal of the RoboCup competition is to help speed up the development of affordable and reliable autonomous robots. Applications from the household service league can be used to develop service robots for the home. What makes RoboCup special is that after the competition, most teams publicly disclose how they programmed their robots, which allows others to benefit from the progress they have made. The competition is divided into five main leagues. In addition to the household service league, teams compete in soccer, logistics, human rescue, and the workplace, to win the championship title.

Sponsors of the Cluster of Excellence’s RoboCup team include the software service provider Itelligence AG from Bielefeld, the sensor manufacturer SICK AG in Waldkirch (Breisgau) and the car dealership Becker-Tiemann in Bünde (Ostwestfalen).
The team of Bielefeld will post updates on the progress of the competition on its twitter account at http://twitter.com/clf_citec.

Posted by LThomßen in General
Kommentare: