Carrying a Table Together with a Robot

In the EU joint project CogIMon, robots are learning to observe, adjust their force, and react

From a robot’s perspective, humans are normally a nuisance: when robots and humans have to work together, it often leads to problems. Researchers on CogIMon, a new project starting at Bielefeld University, want to teach robots how to interact with humans and work together to accomplish tasks. CogIMon stands for “cognitive compliant interaction in motion.” This research group is working on humanoid as well as industrial robots. The project is coordinated by Professor Dr. Jochen Steil of CoR-Lab, the research institution on cognition and robotics at Bielefeld University. Together with six other international partners, the joint project will run from 2015–2018 and is funded with 7 million Euros from Horizon 2020, a framework programme for research and innovation of the European Union. 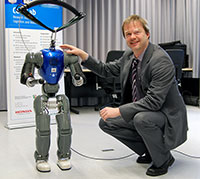 The small humanoid robot COMAN still has some “growing” to do before it can interact “eye to eye” with human adults. Professor Dr. Jochen Steil is leading the new research project. Photo: Bielefeld University.
“The goal of CogIMon is to teach robots to understand the forces during the movement of objects and how to appropriately react to changes in weight or contact with the object while carrying it,” explains Jochen Steil. Humans have no problem estimating the weight of an object, as they can see how heavy something is in the body language of another person. This makes it easy for humans to correspondingly adjust the force exerted when lifting. Currently, however, robots lack this ability. “Robots can measure their own force and regulate it to a certain degree. They can stop their movements or ease off, but they have not yet been able to understand forces or actively control them to take part in a joint effort. We want to change that.”

“Understanding active forces is a big challenge because it entails complex, highly skilled interaction that combines abilities from a number of different areas. Perception, the ability to move objects, controlling flexibility and body motion are a few examples,” says Steil. At this time, there is little theory to help explain how robots can move objects together with humans. For this reason, project partners in Italy and the Great Britain are conducting basic research using interaction experiments with humans. Meanwhile, Steil’s group is developing new controlling and programming methods for the robots. A classic example for moving objects can be seen when a human and a robot or two robots carry a table together. In this action, it is important to adjust one’s forces: the one carrying leads the way, the other follows. When changing who leads and who follows, it is necessary that one is able to predict their partner’s motions and adjust their own movements accordingly.

To research human interaction with humanoid robots, researchers can draw on the humanoid robot prototype COMAN (COmpliant huMANoid platform). COMAN was developed at the Italian Institute of Technology in Genua. It is 95 cm tall and weighs 31 kg. For the CogIMon project, it must “grow” in size by about 25 percent so that it can also interact with human adults. In the future, COMAN is supposed to learn how to “read” human body language. This could allow the robot to be used, for instance, in physical rehabilitation, where it could help train motor skills and coordination by playing catch with patients. While throwing and catching the ball, the robot would have to be able to react directly to its human partners and even fake a shot. This group interaction should be so open, though, that both humans and robots would be able to leave and return to the group at any time without this causing confusion.

The researchers are also planning to develop an additional application for industry using a KUKA lightweight robot. Such robots could be used in factories, for instance, to lift large packages together into shelves and sort them. For this industrial application, it is important that the robots learn to correctly assess the dynamic characteristics of objects in order to properly lift packages with different weights and exterior surfaces.

Posted by NFrei in General
Kommentare: